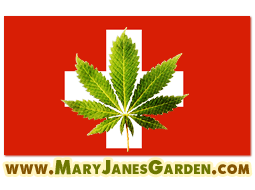 Even though it is against the law in Switzerland for a person to buy, sell, smoke, or grow marijuana, the authorities of this country tend to not make a big deal out of men and women of the area that choose to smoke weed.

Even in cases when a person is found guilty for having a small personal amount of cannabis, or even large amounts of marijuana on their person, they are frequently only charged with minimum charges of punishment.

The reason for this is because the federal government of Switzerland would like to see some changes be made in regards to the personal use of cannabis to actually decriminalize weed.

It is true that it still remains to be illegal for a person to buy, smoke, or grow weed in Switzerland. However, there is still very little attention that is paid to the people that choose to create their own garden for growing plants from marijuana seeds in indoors and outdoors garden areas. For the men and women that would prefer to just buy small amounts of cannabis for their personal use, it is generally not that difficult to locate areas where they can buy weed at cheap rates.