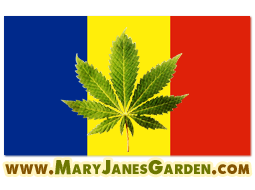 The laws, or the lack thereof, in regards to smoking marijuana for one’s own personal use that have been put in place by the officials of Romania are considered to be quite different than many of the laws that you will find in various other countries.

Men and women that choose to grow their own weed plants from marijuana seeds that they buy or order do not have to fear any type of punishment for possessing marijuana seeds. This is simply because according to the current views of officials in this country they do not hold any legal status at all. This simply means that they are in a status of not being legal or illegal. However, in some cases when marijuana seeds are found on a person they will be confiscated and the person will then be given a warning.

Possessing weed on your person and growing cannabis is not acceptable in Romania. In the event that only a small amount of marijuana is found on a person (between one and three grams), they are typically just given a fine that can range from $150 to $200.

To avoid fines, many people simply discreetly grow weed at their residence either indoors or outdoors in a garden.