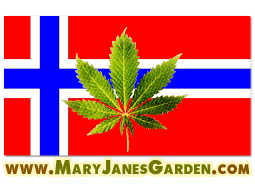 The personal use of marijuana in Norway is not something that is permitted in this country. The laws that are followed in Norway state that a person is unable to buy or sell cannabis, possess and smoke weed, or grow plants from marijuana seeds.

However, when a person is caught with only a small amount of cannabis (as much as 15 grams or less) that is used for their own personal use, first time offenders are usually only given the punishment of having to pay between 1500 and 5000 kroner. There are exceptions that are frequently made however in cases where a man or woman has a legitimate medical need to smoke weed.

Because second time offenders face a much harsher punishment, a majority of men and women in Norway that smoke weed choose to resort to growing their own cannabis from marijuana seeds that they buy from someone they know, or they simply order in on the Internet.

There are many people that have found there are actually quite a few ways that a person can discreetly plant their own marijuana garden. This can easily be done both indoors and outdoors, providing the right amount of weed for an individual’s own personal use.