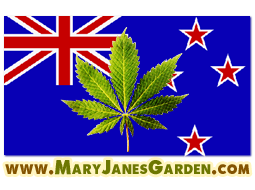 New Zealand marijuana is illegal and the possession of weed can mean being fined $500 and it can also result in a three month prison sentence. Jail sentences are rarely imposed on marijuana possessions. Marijuana has been classified a class C drug and anyone in possession of either 28 grams or 100 joints under the current laws in New Zealand is considered a dealer, unless they can prove that they are not dealing cannabis. Possession of this quantity of marijuana will result in a maximum prison sentence of up to eight years.

The current marijuana laws are included in the Misuse of Drug Acts of 1975 in New Zealand and while there are public campaigns often to legalize cannabis none have been successful to date. The public campaigns to legalize marijuana continue and advocates are determined to change the laws proposed in the 1975 Misuse of Drug Acts. The estimate is that out of over 4 million residents in New Zealand approximately 13.4 percent of these residents between the ages of 16 and 64, smoke marijuana. This places New Zealand at the ninth highest in marijuana consumption in the world.

There are three political parties that each have an opinion on the legalization of marijuana, with the Green Party of Aotearoa calling for the legalization of cannabis for people over the age of 18, with no legal penalty. Growing marijuana plants for personal use would also be legal, but there would be a ban on commercial cultivation of weed plants. The Aotearoa Legalise Cannabis Party are advocates for the legalization of marijuana for recreational, spiritual and medical use, along with industrial marijuana purposes. The Libertarianz Party wants cannabis to be legalized, along with other drugs as a part of natural individual rights. The Ministry  of Health published the National Drug Policy 2007-2012 that proposes to reduce the availability of marijuana and all illegal drugs.