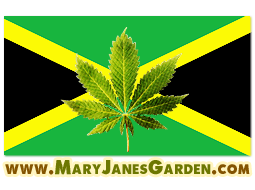 While the rules in Jamaica that have been put into effect in regards to the use of marijuana may be much like that of quite a few other countries, the way in which these laws are actually enforced may be found to be quite different.

The laws that have officially been put in place for the residents of Jamaica state that the use of weed, buying or selling marijuana, and growing cannabis from marijuana seeds is not allowed.

However, what numerous residents and vacationing tourists have found is the authorities do not pay much attention at all to the men and women that openly smoke cannabis. This type of lax attitude also means that it is generally not a problem for people that plan to use marijuana seeds for growing their own marijuana plants.

Even though the use and selling of cannabis is often overlooked by the authorities in Jamaica, there are a lot of people that would prefer to remain discreet about the gardens they have planted indoors or outdoors for growing their own personal stash of cannabis to smoke. This level of acceptance in regards to the personal use of marijuana can be seen in many other countries as well.