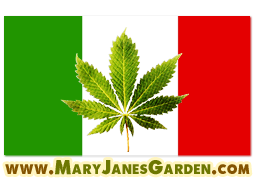 Italy is one of many countries where it is not allowed for men and women to smoke or grow weed from marijuana seeds.

Even though the people that have been charged with a first offense of possessing marijuana are usually only given the punishment of a warning, it is much easier and safer for a person to just be as discreet as possible when it comes to the use of cannabis. Growing weed from marijuana seeds that a person can easily buy on the Internet as well as quite a few other areas is another activity that should also be done in a discreet manner.

This is true of the cannabis gardens that are planted outdoors, along with the gardens that a person may choose to plant indoors.

One notable change in regards to many of the laws that have been put in place in several countries when it involves the personal use of weed is that as time goes by it has become more accepted in numerous areas.

While a person may not be able to readily buy marijuana anywhere that they go, many countries are allowing their citizens to possess and grow small amounts of weed for their own personal use.