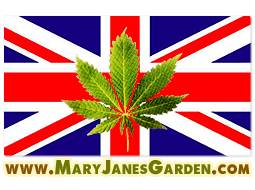 Marijuana is illegal in England or the U.K. and in 1928 it became illegal in the United Kingdom and is classified as a class B drug, then in 2004 it was downgraded to a class C drug. Then the government commissioned a study to be done on marijuana and after the report in January of 2009 marijuana was reclassified again to a class B drug. Throughout the Spring of 2011 the House of Lords heard from a senior policeman, the former Prime Minister and other figures about decriminalizing marijuana. One of the arguments is that the current laws are failing.

Former Prime Minister Evan Harris is one of the people that are calling for marijuana classification to be changed and claimed that scientific advisors agreed that cannabis should be changed from a class B to a class C drug. In July of 2011 MP Julian Huppert believes that the drug policy has failed and there needs to be a complete over hall of the current marijuana laws.

In small amounts there is usually a warning and the cannabis will be confiscated, there usually is not jail time, unless it is a large amount of pot that the person is busted with. This will be documented by police, in order to refer to the marijuana confiscation if they are caught a second time, which the penalty will then be harsher. This record is usually kept for a period of twelve months and if not caught a second time with any amount of weed the document is then disposed of. This type of warning for small amounts only applies to people that are over the age of eighteen years old. Under the age of 18 the person caught with marijuana can be arrested and there will be parental disclosure, in some cases they can be warned, rather than arrested.

If you are in any area in the UK or United Kingdom and you are in need of marijuana seeds to grow, then Mary Jane’s Garden is here to provide you with a wide selection of marijuana seed items for UK. We have feminized marijuana seeds, auto-flowering cannabis strains, indoor and outdoor marijuana strains, and a lot more of cannabis seeds for sale. You buy any of those marijuana seeds and have them delivered in UK. We also have a wide selection of Bongs, Pipes, Vaporizers, and other marijuana items and equipments in our online head shop which also delivers to UK. Our marijuana grow eBook can be downloaded in your computer or any eBook reader in UK. Buying and growing marijuana in UK has never been this easy with the help of our company which is based in Amsterdam, Netherlands. We ship our marijuana products worldwide including UK discretely. It is legal to order marijuana seeds online because it will be shipped right to your mail box in a bubble envelope.

If you buy marijuana seeds, bongs, pipes, vaporizers and other head shop products online, you can save a lot of your money and time especially if you are in UK. There is no need for you to spend for your gas when you take a long ride to look for a marijuana seed store in UK or a UK head shop because you can just do it by browsing the internet. Just a click of a mouse and your marijuana seeds and headshop products will be shipped right to your doorstep. There are also a lot of online seed stores like Mary Jane’s Garden which offers cheap marijuana seeds which are of high quality with delivery to UK and other countries in the world. Delivery and handling of marijuana products to UK are handled well by Mary Jane’s Garden to make sure of the security of the customers.

Marijuana growing, possession, and smoking in UK are illegal but punishments are just minor. Confiscation and cannabis warning are the usual actions which are taken to people caught using, growing, or possessing marijuana in the United Kingdom. If a person has received several repeated “cannabis warning” in a year, then he or she is subject for arrest. There aren’t any harsh punishments for Cannabis growers, smokers or owners in the UK. Currently, a lot of people are trying to make a movement on making cannabis legal in the UK and in the world. It is advisable to remain discrete and stealthy when it comes to buying, using, and growing marijuana in UK. Indoor marijuana growing in UK is very much advisable to those who grow marijuana for personal or medical use. You can also use a stealthy outdoor grow and use stealthy marijuana strains like ganja dwarf and many others in UK.