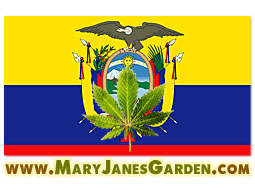 If you are planning to move to or visit the area of Ecuador, it would be a good idea to avoid buying or selling marijuana. This is something that is not allowed in this particular country.

It is however perfectly fine for men and women that are in this country to smoke weed. This of course is as long as the amount of cannabis they have is just for the individual’s own personal use. The amount of weed that is considered by authorities to be an acceptable amount for a person to possess is up to as much as twenty grams of marijuana or less.

Even though it is legal for a person to carry small amounts of marijuana, it is much safer for the growing of weed indoors and outdoors to be done in a discreet manner. Just as it is in quite a few other countries, the selling of weed is not allowed. This however does not have to deter any person that would like to use marijuana seeds to grow their own cannabis plants.

As can be seen in Ecuador and several other countries, the use of weed is becoming a lot more accepted all the time.