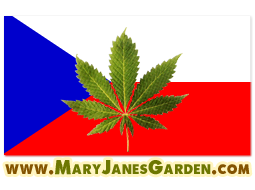 Czech Republic is just one of a long line of countries that the selling of cannabis is not allowed. However, it is a country that has much more lenient laws when it comes to a person that has marijuana or marijuana seeds on their possession.

This is of course as long as the amount of cannabis that a man or woman has on their person is within a certain limit. In the Czech Republic, a person is allowed to have small amounts of weed in their possession without having to worry about being charged with any type of crime.

The authorities in the Czech Republic also allow for a person to have as many as five plants or less that they are growing privately for their own personal use in a garden they have indoors or outdoors. This means that although a person is not allowed to buy marijuana, they can feel safe and comfortable about growing their own cannabis.

When you consider just how strict a lot of the laws are in other countries on the people that smoke or grow weed, you will agree that the laws that have been put in place in the Czech Republic are quite lenient.