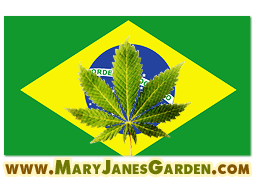 A bill that President Luis Inacio (Lula) of Brazil signed completely changed the way that a lot of marijuana users had previously been viewed in this country.

According to the bill smoking or possessing weed is not a crime that users will be arrested for as they are in many other countries. Instead, they are given the opportunity to do community service and take advantage of rehabilitative services that are offered.

When the Brazilian authorities learn of a person that is marijuana seeds for their own personal use for growing weed either indoors or outdoors, it does not result in the arrest of the individual. When the growth of cannabis is found, the person that is responsible for growing the weed is generally just given a warning. The person may also be required to attend special types of educational classes and perform community service.

When you consider the severity of punishment that is commonly used in a lot of other countries as opposed to the normal actions that are taken in Brazil, it is easy to see that growing marijuana for a person’s own use is becoming much more accepted than it was in the past.