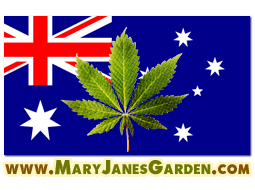 Australia is a country that the possession, growing, buying or selling of marijuana is illegal and in each of the country’s territories the penalties are different. In any of the Capital Territory, South Australia, the Northern Territory and Western Australia, all have different degrees of punishment for marijuana. Small amounts of marijuana possession up to 25 grams or growing up to two plants, is usually a fine, which is similar to a traffic ticket. The person that is ticket in many cases can choose to attend drug and alcohol classes, which can mean not having to pay the fine. Growing more than two plants or being caught not only with marijuana, but also with smoking paraphernalia is a higher fine and classes are an option.

In Queensland having cannabis smoking paraphernalia is illegal and a small amount of marijuana when caught will be required to attend an assessment and treatment program to be educated about drug use.

There are more harsh laws in some of the states or territories in Australia that were included in the Drug Misuse Regulation of 1987, including a maximum prison sentence of 15 years. This type of sentence is rare and then the Police Powers and Responsibilities Act of 2000, includes laws that for the person that is found to be carrying less than 50 grams of marijuana to be offered a drug diversion program, but they must not be committing any other type of offense at the time they are caught with the weed.   Legislation in 2006 reduced the amount of cannabis  that is able to be grown indoors in hydroponic setups without being considered it as a large or commercial quantity, which would carry a more stiff sentence under the Australian Drug Misuse and Trafficking Act that originated in 1985.