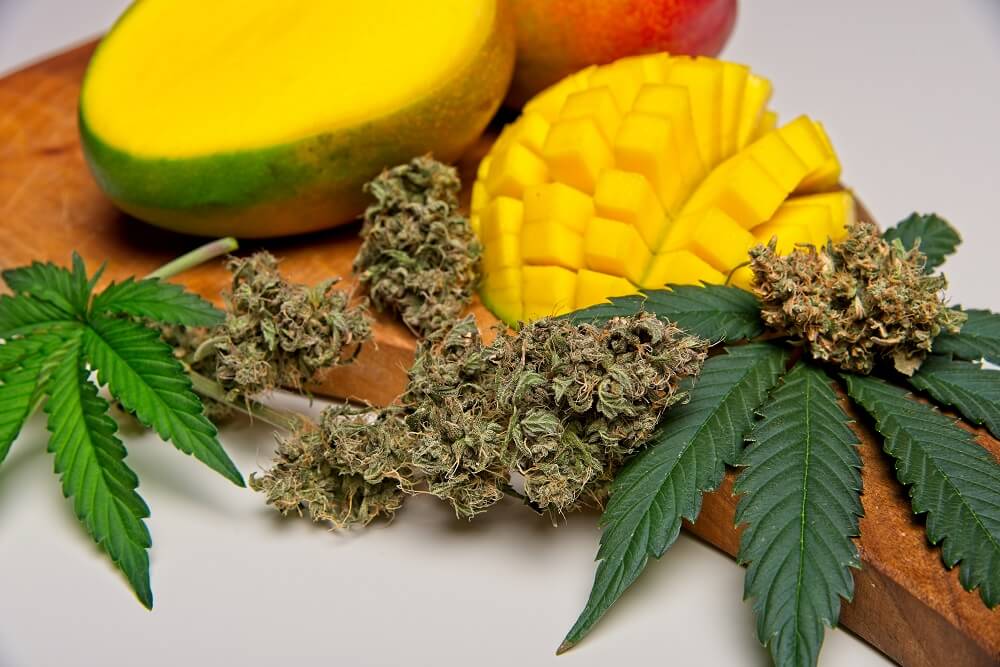 Mango and Weed: Are They the Perfect Pair?

In the world of cannabis, people go crazy over mangoes and marijuana. Many say that they are just a perfect match. So, do mango and weed really compliment each other?

The perfect combination of mango and marijuana aids in cleansing your palate that brings you to a whole new experience with new flavors bursting in your mouth. Also, mangoes have been studied lately in relevance to their effects on cannabis because of their ability to maximize the effects of THC and CBD. It can also stretch the duration of high according to cannabis experts.

In terms of effects and benefits, cannabis lovers will surely enjoy a whole new and more intense experience in smoking weed and pair it with mango. Aside from extending the effects of both THC and CBD, these tropical fruits are just totally sweet and flavorful that you cannot just resist to eat up with just one piece.

How do Mango and Weed make you feel higher?

They say that eating a piece of mango an hour or 30 minutes before you consume cannabis either through smoking or edibles will enhance the effects of CBD and THC in a great way. Many say that it may be too intense for them. However, their minds changed when they experienced it themselves.

For people that are looking for a scientific explanation about the effects of mangoes when you are using cannabis, then you are in the right post. To learn all of it, keep reading this post so that you’ll further appreciate this match-made in heaven.

How does Terpenes Help Enhance the Effects of Weed?

Mangoes, just like other fruits and plants, contain a natural and organic compound called terpene. However, its terpenes are more particular than other plants and fruits. It has myrcene terpenes that have a distinct pungent smell that serves as a component for particular fruits that have a strong smell and aroma that mango contains. For cannabis, its terpenes are usually found in the same place where THC and CBD are concentrated.

These are the very same substances or components that are present in mangoes. To add more, there are many ways for these organic compounds to help their process in your body. The THC content in cannabis helps increase the potency of the high and effects, which makes it a lot faster for the high to kick in and helps in making the high last longer. The myrcene terpenes in mango trigger the high even more. Thus, mangoes do very well with strains that have low THC levels since it helps in elevating the high and its effects very well, especially with the more potent strains.

After you munched a mango before you rolled a joint, its myrcene terpenes then flow to your bloodstream, so by the time you inhaled the cannabis’s smoke and the THC starts to interact with the myrcene terpenes, that is when the wonders start to happen.

The THC level then increases a lot higher. However, experts are now coming up with a thorough and informative scientific explanation for this. Thus, there is no exact and scientific way for cannabis experts to explain it currently.

From a cannabis experts’ perspective, the terpenes from the weed’s THC attached themselves to the mangoes’ myrcene terpenes in your bloodstream, which pumps up the high and lengthens the duration of the great feeling when you smoke weed. A lot of cannabis users have already testified that they really get a level up high when they eat mangoes before they smoke or consume cannabis.

What does Myrcene Terpenes do exactly?

Even though there is no furnished scientific explanation about the THC’s terpenes and mangoes’ myrcene terpenes interact with each other, the scientific inquiry about this revealed three hypotheses.

According to some cannabis experts, the THC that is mixed in your bloodstream that already contains the myrcene terpenes from the mangoes you ate earlier creates stronger and more potent effects, which were explained above. In medical science, the most common evidence of myrcene terpenes’ effects is likened to sedation. With that in mind, there are many observations out there that myrcene terpenes have an adverse effect if it is mixed with THC, where its sedating effects turn into psychoactive effects. This hypothesis, though, needs a lot of evidence before it can be verified.

Are there other scientific ways to explain Mangoes and Weeds?

Because of its popularity in the cannabis world, a lot of cannabis experts and scientists continue to come up with new scientific studies to publish more explanations about the effects of mangoes on cannabis. However, there is still no solid explanation for this.

The best explanation you can get right now is the ones mentioned above. However, you have to think outside the box first. It’s not just about getting higher when consuming cannabis and mangoes. Both have their health benefits that you have to focus on so that you will further appreciate and value these natural wonders.

What are the health benefits of Mangoes?

Mangoes are considered in some parts of the world as the “king of fruits” for many reasons that go beyond their flavors. Mangoes are not just eaten sweetly. In Asia, mangoes are eaten green and unripe, and it has that sour and savory flavor that compliments other salty dishes. Green mangoes are very popular in Asia, while Westerners are very used to eating ripe mangoes. In general, mangoes contain a lot of nutrients that your body can benefit from.

To help you out identify these benefits, check out a detailed list below.

Mangoes are fibrous fruits that help promote healthy digestion. Aside from that, it also contains enzymes that help break down the food and other substances in your digestive system, especially protein. Since it contains fibers, it helps lower the risk of many diseases. At the same time, green mangoes contain pectin fibers that also work wonders.

Mangoes are rich in vitamin C, which contains a potent antioxidant that aids in boosting your immune system to protect you from flu and other transmittable ailments. According to health experts, a regular-sized mango is packed with up half of your recommended daily intake of vitamin C.

Mangoes contain beta-carotene that is an effective nutrient in producing Vitamin A for your eyes. With sufficient vitamin A, your eyes will have improved vision and improved overall health to prevent any macular degeneration because of age that can result in loss of vision.

Munching mangoes every day will help regulate your cholesterol level effectively. Because of the presence of fiber pectin, it will help lower the bad cholesterol or the Low-density lipoprotein (LDL) that is responsible for various ailments in your circulatory system and are responsible for strokes, heart diseases, and fatty liver diseases.

What are the benefits of Cannabis?

cannabis became very popular because health experts found out that it can help people with cancer fight its effects. It has a lot of evidence that proves cannabis’s cannabinoids or CBD can help fight cancer cells.

People who suffer from depression rely on the uplifting and motivating effects of cannabis. Because of the endocannabinoid compounds that can be found in cannabis, it helps promote a positive mood to people who have depression and ease the effects of the latter.

It helps People with Autism

The cannabis’s high is known for its calming effects that affect both the mind and body. It helps children who suffer from autism, especially those that have tendencies to hurt themselves or the people around them when they have mood swings.

It helps People with Seizures

Cannabis’s compound, CBD, contains calming effects that help people control their seizure attacks. It calms the mind and body to the extent that it promotes sleepiness.

Mango and weed are truly a good pair that compliments each other where you can get a lot of benefits. Just remember to take everything in moderation considering that mangoes increase the potency of the cannabis’s effects.