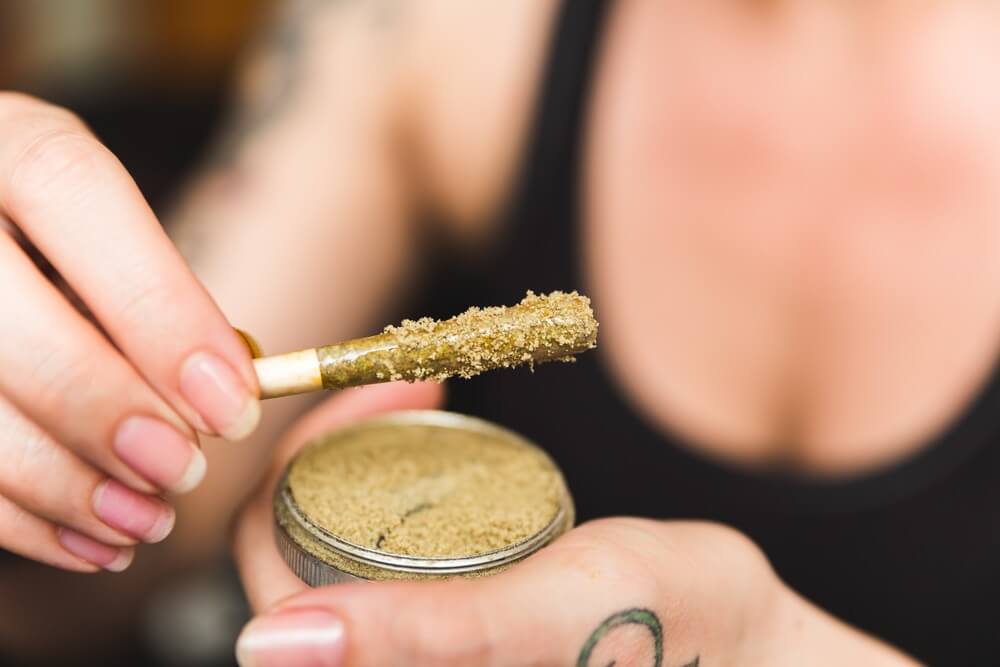 Simple Steps on How to Make Kief

If you checked your weed buds from close up, you might have noticed that they’re embellished in resin glands shaped like mushrooms, referred to as trichomes. Most of them are concentrated on buds, but fan leaves and stems are covered, too. So, how to make kief?

Break off the crystals, and you’ve got a kief. It’s the same thing that you found in the base of your shredder. And it’s terrific!

Kief is two times stronger than dried marijuana where it originates from, and it has all of the cannabis beneficial compounds such as CBD, THC, and terpenes. With changing colors from white to light-green (depending on the amount of plant material combined with loosened trichomes), kief resembles a powder. It feels sticky to touch, but a blow of air can spread it everywhere.

It is the word for the crystal-like patterns on the round tip of the resin trichomes that gives the marijuana plant its frosty look. The trichome’s apex is where the maximum concentration of the psychedelic THC is stored.

The trichomes act as an essential defense mechanism versus herbivores. The bewildering crazy effect felt by a herbivore that ate a part of the marijuana plant coated in resin substance serves as a definite hindrance. It saves the whole plant from being devoured.

How to Make to Kief from the Weed Plant

The easiest way to make kief from the remaining parts of the weed plant is through a three-chamber herb crusher to filter and gather it. Using a two-chamber herb, you lose the precious kief crystals because they fall and stick inside the crusher.

If you’re extracting more significant kief amounts, it’s ideal to use necessary screening materials. Many consumers make their makeshift filters to save up. Layered screens set on the crest of one another are also an excellent and affordable way of filtering and making kief from the remainder of weed plant matter.

It is crucial to remember that giving her ranges in size within 75 to 125 microns (it’s one-millionth of a meter), so the LPI or number of wires or lines per inch on your filter is vitally attaining the desired results. As a rule, if you have a bigger screen, you will likely have a smaller LPI. The best choice is a filter with the mesh within 80 – 270 LPI.

If you don’t like filtering your kief and prefer to buy it at a seed bank, the kief color will give you a sign of its quality. If you purchase a lighter color, then your kief is purer. But if your kief has a greenish shade, expect it to contain a massive plant matter, and hence, it is less pure. So far, the better option is kief with an off-white color because it is much purer.

Kief From Your Palms

If you are familiar with making hash in the most traditional method, using hands, this is another way of kief collection. It often results in a compact hash instead of powdery material most linked with kief. This process is a glove-recommended because using your bare hands to accumulate not only lessens its effectiveness due to uptake and body temperature, but also makes it a carrier for bacteria, oil, and other filthy things loitering in the skin.

Kief From a Crusher

As a consumer, you’re probably familiar with the idea of a weed crusher. It is a small handy container that has a twisting turn to crush plant material attached within. Crushers often include “stages” or “chambers” as separate parts, a primary two-piece crusher, with only an attached upper and lower part, which is called a “two-stage” crusher. Although if you’re considering collecting your kief, you will need an upgrade.

Crushers with more than two stages are quickly getting and are always among the most affordable ways of gathering kief without making more waste. A three-stage crusher has a milling cell with teeth, accompanied by a bud accumulation cell in the center. The powdered weed in this cell sits down on a sheer mesh screen, leading to the kief collecting cell.

Upon using one of the grinders, “gathering” that leads from your weed is an automatic method. When cannabis is powdered, it falls in the second cell, and it scrubs against the filter, which causes the kief to fall off the buds and into the gathering cell. In this instance, gathering kief is as simple as powdering the marijuana you have to pulverize anyway. That being said, that is not the most comfortable method, and small particles of marijuana buds end up in the kief cell, and the possibilities are you won’t see them. Still, if you want purity, you might want to check other processes.

Kief From a Dry Filter

A dry filter unit for cannabis works hard like in the second phase in a multi-stage crusher, free of all the crushing bits. Once your plant matter is crushed, your marijuana is set in a sealed container sitting on a slender mesh screen, similar to the crusher.

Many dry filters vary because they usually have numerous screens/stages of their own, with a lot of different cells specially made to sift through the kief to various purity levels. As we discussed earlier, that kief gathered through a crusher possibly still has some plant matter. A multi-stage dry filter will sift your kief further.

Dry filters come in a wide array of different types, and some are bags, some are thick boxes, while others contain more phases. Every stage has a different mesh size (evaluated in microns) that sift many parts of the kief as it goes down the filter. In a multi-stage filter like the bottom, the cell can either (A) keep the premium quality kief the filter will have or (B) keep powdered debris that is leftover detritus and plant matter (although still smokable or can be made into extracts). Regarding option B, the kief is in the cells over the last cell. In any case, it is best to shake the filters through a non-perforated area, glass, metal, or marble would be ideal, but also parchment paper works well.

Another thing to keep in mind:

With how trichomes are formed, with the ball of resin at the summit of the hair, numerous methods for making kief suggest that you keep your marijuana bud and your workspace cold. Because it helps make the resinous more breakable and most likely to separate from the plant material as you filter. Also, this moves us into….

The same hand collection process, gathering kief off of a cannabis bud using ice and water, implies that the kief is probably fated to be transformed into a hash. Making a hash includes ice, water, and even dry ice. If you like not having a parched, powdered kief as your final product, it is best to read information.

As you learn from reading this guide, how to make kief from your weed plant is very easy, and once you have finished, there are myriad ways of enjoying it. We hope this article answered your questions about what is kief, the several options for making kief, and sharing with you some ideas on how to use kief later.