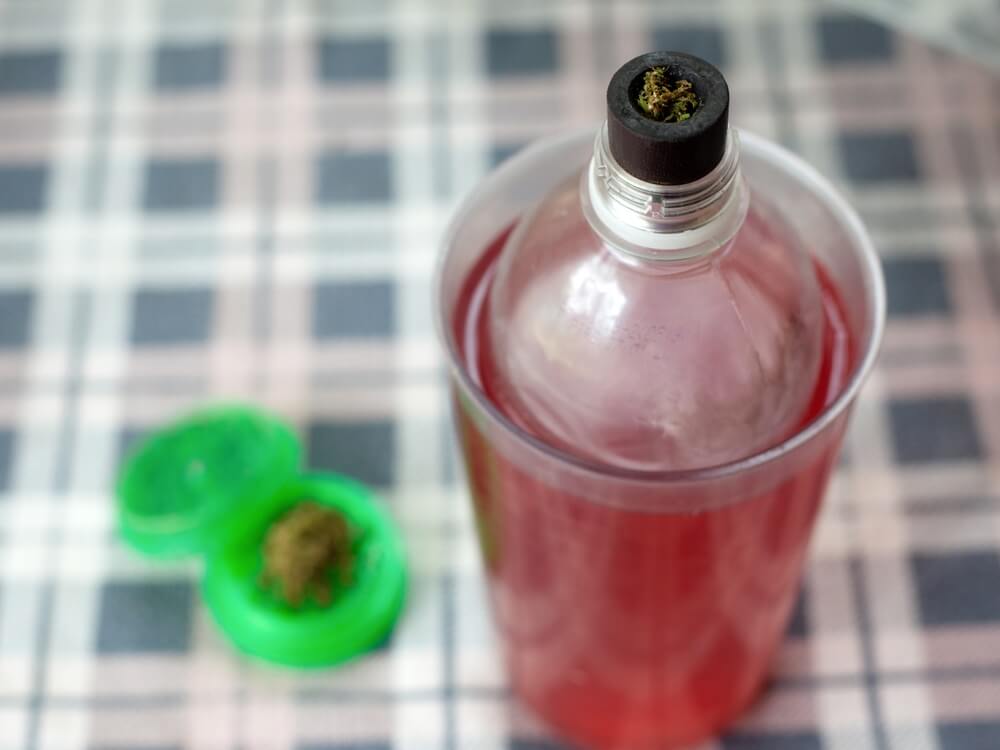 5 Easy Steps on How to Make Homemade Bong

Bongs are one way to consume your cannabis, along with other methods of consumption. Bongs belong in the same category as joints, blunts, and other inhalation processes of ingesting marijuana. Users are suggesting that smoking is ideal and iconic, rather than other techniques.

Due to that specific reason, consumers are yearning to see what other forms of bongs are available. Thankfully, joints and blunts aren’t the only ones who have different convenience versions, since you can make your homemade bong.

Within the comforts of your home, you will find it easier to smoke anytime you wish. Before riding with the great echoes of other users, let’s first understand the rudimentary knowledge revolving around bongs.

What is Bong, Anyway?

Bongs go in different slang terms such as billy, bubbler, etc. Whatever it is, consumers are confident that it offers a more potent impact than other modes of consumption. Usually, water pipes are the best option for smoking cannabis.

As for its origin, history has it that bongs aren’t modernized. Meaning, they could be around for centuries. The name of the smoking technique, on the other hand, came from the ‘baung,’ a Thai word that pertains to bamboo tubes. The said bamboo tube back then is prominent for smoking cannabis.

But with today’s era, the appearance, and even materials associated with bongs, have evolved into a whole new level. The once simple tube of bamboo turned into various physical bodies, which we will discuss in this article.

How do Bongs Work?

Since bongs are now existing in different shapes and sizes, you might encounter chances that will require you to work it in another way. Back to its appearance, bongs sometimes do have a colorful physique, and artistic people prefer to paint it with pictures to heighten the experience.

Nonetheless, the typical way to lead bongs in a functional path is statistically the same as other forms and only quite a few or distinctive. To work with bongs, you will need to understand its service first. The higher the weed grams, the stronger the pull.

To make the smoking happen, any size of the bowl will contain dried weeds. This part is where the knowledge about dosage is crucial. Otherwise, you might find yourself under undesired circumstances. You will need a fire-inducing tool to let the weed combust. During the inhalation process, the water under the bong will bubble up. For technical words, it means ‘percolating.’

When the water bypass percolation, the smoke will rise, using the water as a medium before it passes specific filters. Afterward, the session is now ongoing. The smoking bong is filtering and cooling down the smoke from the scorching marijuana strain.

If you’re here to reconsider the steps you once used during your creative process in making a bong, you’re in the right place. Searching for materials already available in your house for a homemade bong is a straightforward task. After all, you will only need any hollow things, or you can turn anything into a hollow-like shape and long tubes to serve as pipes.

Some materials will make the work easier for you. For instance, finding a metal can only require you to poke several holes in it. Voila! You have a smoking tool to enjoy now. Apples can be pipes, too! Everything in your house could be a potential smoking device. You will only have to splash your creativity on it.

Necessary pipe and bongs option will only need a bowl for the weed’s place and a mouthpiece that will allow smoke to travel to reach your mouth. Surprisingly, numerous household objects are obtainable in your homes, and sometimes they provide better airflow and heady hits. Moving forward, here are the eight types of homemade bongs and how to recreate them for your future sessions.

Making Bongs out of Water Bottle

If you would like to talk about reach and accessibility, this method will be the best option. Aside from yielding accuracy in shapes and sizes, the bottle’s condition is already prepped for utilization. Only a few tweaks will make it the perfect homemade model for DIY bong.

– Cut holes on one side of the downward part.

– Insert any tube (preferably, where air can come through) inside.

– Cover the hole using any secure forms of tapes.

– Grab a foil and shape it like a cone.

– Poke holes in the bottom part of the bottle.

– Put the foil at the end of the tube.

– To make a mouthpiece, use the bottle of the cap by unscrewing it.

– Pour water in the bottle (just below the downward part).

– Grab a bowl and put your weeds in it, and the homemade bong is now ready to use.

Pen as Pipe for Bongs

Pen as an alternative Pipe has got to be the most straightforward homemade smoking device for bongs. As the name suggests, you will only need a pen and a few pieces of equipment to make it seem like a pipe.

– Search for any pen in your homes. Having a metal point is ideal.

– Remove the pointy part, the end cap, and the pen cartridge leaving the plastic pipe.

– Using the end part, put in the lid (reversed style) to serve as a bowl. The untouched end will be the mouthpiece.

– Close the bowl part with a sellotape.

– Add some weeds and consider yourself done.

Apple as Pipe for Bongs

The use of Apple as a substitute for pipe in smoking bongs is hands down, one classic move. For starters, who would’ve thought an apple could be a smoking device? No one. The good thing about the apple as the pipe is there are no possibly harmful things to burn. Poking holes will be the only work you will conduct.

The method is as follows:

– Grab an apple and take out its core.

– Make a narrow hole in any side you wish, where you will be inserting any pipe for the mouthpiece.

– Poke another hole for your fingers to grab as you manage the airflow in the pipeline.

– If the hole from taking out the core is deep enough, you can already pour the weed inside and burn them.

Tissue Rolls are excellent in making steamroller. In this method, you will only have to add a few twists and a couple of needed materials.

The method is as follows:

– Get cardboard of tissue roll and create a hole, using a pen, a quarter away from any end part.

– Grab an aluminum foil and shape it as a cone.

– Insert the foil in to be an alternative bowl.

– Seal the hole with any durable yet breathable tape.

– Light the bowl and cover the other end with any object.

– Smoke extra hit with the colossal shape of the tube.

Soda Can as Pipe

One of the simplest methods to replace the original pipe is making one out of soda can. The metal can only equip itself with a couple of items to build it up. The mouthpiece is already present. So, no more additional efforts for you.

The steps are the easiest, but burning metal soda cans will result in harmful damages. Apart from the toxins, you will also inhale the paint outside the can. With that, soda can should be the last resort for you if you are left with no choices.

– Produce a dent on your can’s one side.

– Make use of any point objects in creating holes for burning weed.

– Use the part of the can for drinking as a mouthpiece.

There is no assurance that the listed steps are safe from ingestion, so it should only be a part of desperation in conducting a smoking session. But, if you can afford a bong, use it as much as possible.

Regardless, it seems the apple alternative is the only harmless method of making homemade bongs among the enumerated techniques. Should there be undesirable outcomes, it is best to go straight to a professional medical practitioner. Otherwise, you might undergo either short or long term outcomes. Surely, you wouldn’t want that to happen.