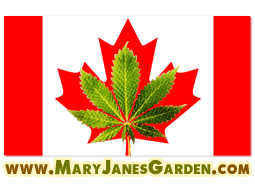 People that live in the southern areas of Canada have a much wider choice in the specific types strains of marijuana seeds that they can choose to order or buy, which will provide them with the benefits of a high yielding crop of flavorful weed.

Even though southern parts of Canada are areas that are still quite cold, being a bit nearer to the equator gives the opportunity of being able to use several different strains of indica, as well as mixed strains of sativa and indica can also be used as well.

To list a few of the strains in marijuana seeds that would be more productive in this area and result in flourishing weed plants would include Early Misty, White Widow, Purple Power, Northern Light x Big Bud, White Queen feminized, and several others.

Early Misty is a sister to White Widow that matures quite a bit sooner than its sister strain. As a matter of fact, Early Misty cannabis matures the soonest out of other strains that are commonly used for growing in southern areas of Canada. Because this choice in marijuana grows from one main stem, it makes it perfect for growing outdoors on a balcony.