A cult group in the Africa believed that the deities Oduduwa and Obatala created the world. And while they are busy with the works, they too were preoccupied in smoking Yoruba Nigeria. This legend was then celebrated through Itapa festival where people would smoke weed in commemoration of the event.

The Yoruba Nigeria originated from Africa. It is considered as the purest strain, as it has never been in-breed with any other variety. It has a hash-like flavor and aroma that makes one definitely high. For some the weed is used for medicinal purposes.

When propagated, the Yoruba Nigeria plant is best cultivated indoor. It could grow for up to 70 centimeters and the flowering period runs only in two months. It is ideally harvested during September as it yields approximately 350 grams per plant. It has a tetrahydrocannabinol (THC) intensity of 15-20%, a good kick enough to give you good high. 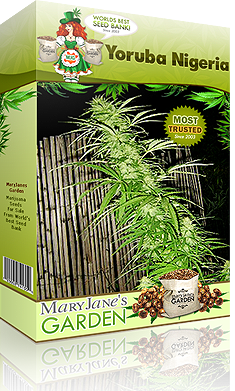